85,000 square feet to be added to Ferguson Academic Building 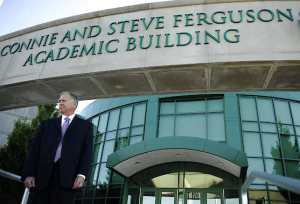 The approval is the final step in a six-year effort to increase the size of the Connie and Steve Ferguson Academic Building, which opened in 2002.

“It seems like this project has been delayed for so long, it’s a bit surreal that it’s finally been approved to move forward,” Bloomington Chancellor John Whikehart said late Wednesday afternoon. “There’s a lot of excitement here today.”

Ivy Tech moved into its current location on Daniel’s Way on Bloomington’s west side in 2002 and served a student enrollment of 2,600. In the following decade, it became one of the fastest-growing community colleges in the country, increasing in enrollment to 6,800 in the 2012-13 school year. The rapid growth has forced the college to spend $460,000 annually on leased space for classrooms and college programs.

The Phase 2 expansion will add 85,000 gross square feet to the existing 148,000-square-foot building. Additional classrooms, science labs, faculty offices, computer labs, an auditorium and student wellness center will all be added with the expansion.

Some remodeling of the existing building will take place as well, with the bookstore, library, student commons and tutoring center moving into the Phase 2 space.

The addition will not erase all of Ivy Tech’s need for leased facilities, however, because the college’s culinary program is located near the campus in well-equipped kitchen space in the former home of an MCL cafeteria. Still, Whikehart said the expansion should enable the campus to cut its leasing costs in half.

Although Ivy Tech worked with architects and construction engineers to draw up expansion plans in 2007, portions of the plans need revision, Whikehart said. After the Indiana Higher Education Commission approved the general expansion plan last month, Ivy Tech officials have been meeting with architects weekly in anticipation of the possible final approval of bonding authority construction this week.

“If we can keep to our current schedule and everything goes perfect, we could be in the new area in the fall of 2015,” Whikehart said. “Few things in life go perfectly, however, so under less-than-perfect conditions, we still think we can occupy the new space in the spring of 2016.”

State Budget Committee Chairman Luke Kenley, a Republican state senator from Noblesville, said the Bloomington project seemed “worthwhile” and said, “I know they’ve been waiting a while. We’re glad to be able to move this forward.”

Fellow committee member and state Rep. Tim Brown, R-Crawfordsville, said he was impressed that the Bloomington campus serves students from 71 Indiana counties and noted, “We felt confident that they will be able to sustain the enrollment this investment requires.”

The budget committee approved bonding authority for $20 million. “The state has the expectation that 20 percent of the construction costs should be raised privately, so the remaining $4 million is up to us,” Whikehart said. “We got a nice jump on that with a $1 million donation from Connie and Steve Ferguson, and we have been building in some funds through reserves — money we’ve squirreled away here and there. But we will have some money we have to raise.”

“The original funding was approved during the 2009 special session. However, the funding was held by the Daniels administration, which meant the state has been wasting tax money for years on rent for buildings scattered throughout Bloomington,” Pierce said in a prepared statement. “Fortunately, Ivy Tech will now pay less for the bond to construct the new addition than it has been spending on rental costs. I appreciate the new administration and the State Budget Committee for ending the penny-wise, pound-foolish policy of the previous administration by finally getting the project underway before construction costs rise any higher.”

Pierce was especially critical of the decision to delay the project when construction costs dropped by 20-25 percent during the recession.

Indiana University also won approval for a major project it has been seeking at its Northwest campus in Gary. The budget committee approved a $45 million joint project with Ivy Tech Community College Northwest to replace Tamarack Hall with a new facility. The previous building was severely damaged in a 2008 flood.

The committee also approved a Department of Natural Resources $292,000 project to replace a 40-slip floating dock at Paynetown Marina at Lake Monroe.